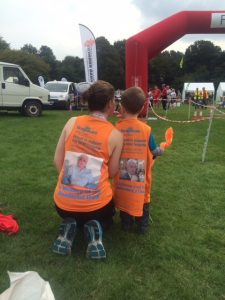 In 2013 I lost my Dad very suddenly to a melanoma. He was only 62. I started running to get through the intense grief that followed. As time went on I decided to try to focus on raising money in Dads name. The following year I did my first marathon in Barnstaple, I raised money for the hospice that cared for my Dad.

In Chicago I ran for a charity raising awareness of Melanoma which is obviously very close to my heart.

My hope is that as I complete these marathons I raise money and awareness of melanoma in Dads name. I have just been accepted to run the Boston marathon. I am running for Impact Melanoma. This charity raises awareness and dangers of the sun through going into businesses and schools.

I’m now working towards achieving all 6 world marathons. I have 4 of the 6 already and am determined to have them all!

The world marathon medal will mean I have achieved such a huge goal from such a dark time for me and my family. I would like to encourage other people going through similar to go for their goals even when at times it can seem unachievable.